It’s being reported around the web today that Google Earth has found Atlantis :) 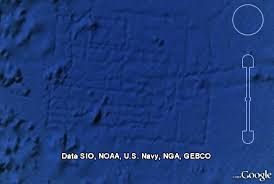 Here’s the co-ordinates to find Atlantis with Google Earth;

The man from the sun says yes but the man from Google says no, though:

“Bathymetric (or seafloor terrain) data is often collected from boats using sonar to take measurements of the seafloor. The lines reflect the path of the boat as it gathers the data,” Google said.

It’s sonar trails, if you believe everything Google says, of course.

Google Earth also reportedly revealed what looked like the skeleton of a German WW2 bomber plane – a missing Junkers 88 – lying at the bottom of the dam next to Whinhill golf course in Greenock (where I am from). That also turned out to be false.

We use cookies to track visitor usage on this site. More info